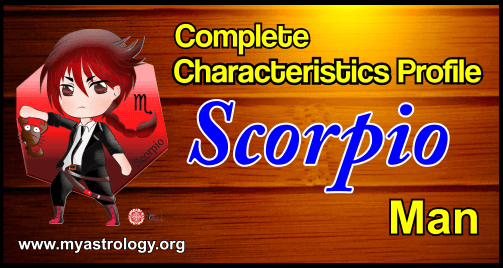 When you talk about a Scorpio, one of the basic personality traits that come to your mind is passion. The same goes for a Scorpio man too. He is intensely passionate about everything around him, including love. If you look at the surface, he will look totally calm and composed. Just look beneath that outer layer of his and you will find his smoldering passion. In case you are scared of getting burnt, better put your jogging shoes and run away. Don’t mess with a Scorpio man unless and until you are sure that this is the man you want.If you manage to go close to him, you will be rewarded with a warm fire that will ensure you are never left cold again. Once you have glanced into the piercing, hypnotic eyes of a Scorpio male, you will never again be totally neutral towards him. His characteristics profile is an odd mix of intellect, philosophy, emotions and passion. He loves luxury and tends to indulge in excesses, in case of food, drinks and love. So, you saw that – love! Yes, it’s true. Scorpio men are the most passionate about love and romance.

They never get caught in it unawares. They know about it since the time they learned how to talk. Even the most innocent looking Scorpio man will always be filled with passion inside. Never ever arouse his temper. A furious Scorpio man can give you lifetime-lasting scars, especially when he is hurt. He has to win in each and every aspect of life and failure breaks something inside him. Yet, he will display perfect sportsmanship and never even let you that defeat has bothered him.

Most probably, a Scorpio guy will keep a girl tortured before proposing her. If you are involved with such a man, better ensure that your reputation is spotless. He will never ever go in for a girl who is ludicrous or shameless. Gossip seldom interests him and he is hardly bothered by other people’s opinions. He knows what he is and what they say or think will hardly make a difference. Forget strangers, even the views of his friends or relatives do not matter. He is one of those who will marry you even if the entire world is against you.

Once he has become close to you and formed an opinion about you, no one in the world can sway him. Honesty, sincerity, guts and reliability are ingrained in a Scorpio male. He never indulges in self-pity and envying someone is beyond him. Who could be better than a Scorpio? If you want to get involved with a Scorpio guy, better have some courage in yourself too. If you are planning on enticing him with that feminine mystery, it’s definite that he will get attracted towards you. Then, prepare yourself to be ripped off that mystery.

He loves to solve mystery and you will be probed deeper and deeper till all the secrets have come out. He is very choosy with friends, so you can imagine what he will do in case of a lover. It will be like going through an X-ray machine. Once he has made up his mind that you are the one, he will drown you in his passion. He is combination of a caveman and a sophisticated prince. One thing that you will have to get used to, with a Scorpio man is that he will never display his emotions in public. Infact, he may even make fun of you in front of everyone.

Scorpio men are jealous and possessive to the extreme. Don’t even think of teasing him with another man. He will erupt like a volcano and your male friend may end up in the hospital. On the other hand, you may get plenty of reasons to be jealous. There is hardly any person on this earth who can resist the magnetic personality of a Scorpio. Always remember that the term loyalty is synonymous with Scorpio and how much he charms the other women, he will remain dedicated to you.

As a father, Scorpio man will demand discipline, respect for elders and independence from his children. You may have to teach him how to display his emotions and be tender towards them. In this case also, act with tact and diplomacy. Never try to dictate him about how he should behave with his children. After reading this, are you wondering whether you should think about the whole relationship again. Take my word, nobody can resist a Scorpio male and you are also one such person.

Once he has made up his mind that you are the one for him, he will charm you out of your senses. You will be hypnotized by his captivating and intense gaze and won’t get the time to escape. If you have the courage and patience, his touch will be as cool as ice and his passion as hot as molten lava. He will take you along with him and you will see the world like never before. If you manage to understand him, he will become the most kind, considerate, loving and selfless man in this world. You will have a husband most women only dream about!