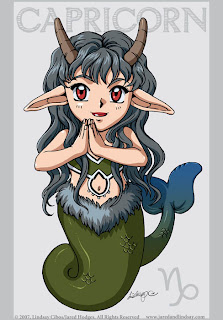 The zodiac sign of Capricorn is represented by the symbol of ‘The Goat’, more precisely a Sea-Goat. Capricorns are not the ones who seek limelight; rather they make up the audience that admires. They are like the tortoise, which moves slowly and still wins the race. A Capricorn finds it extremely easy to merge into a group and will look like one of its original members. He always seems to be surrounded by an air of melancholy and seriousness. He has a soothing voice, pleasant appearance and a convincing personality.

A Capricorn not only looks harmless, rather he is quite incapable of any serious damage. He takes abuses, strains, failures as well as responsibilities quite calmly, without even batting an eyelid. He knows where he has to go and will persistently move towards his goal. He holds great respect for the people who have excelled in their life, respects authority and honors conventions. One of the most admirable traits of Capricorns is their ability to submit and adapt. They let people go ahead and then find a way to reach the finish line before them.

A Capricorn’s characteristics profile exhibits his quality of keeping the eyes fixed on the aim. A Capricorn does not daydream. He is above envy, obsession, recklessness, rage, abuse, idleness and negligence. As far as he is concerned, all these things are obstacles in the way of success. He is very romantic, but emotions do not make him oblivious of the practicalities of life. Unrestrained passions and emotions make him uncomfortable. At times, a Capricorn may put his foot down and refuse to work till he is given the complete power.

However, such a situation is pretty rare and the spell won’t last long. After some hard jolts, he will back on his track. Capricorns are quite contended with their lives and show respect for age and experience. They mind their own business and would not give advice, unless asked for. In case you do ask for their advice, be ready to get it with some harsh suggestions. He will also expect you to follow it. A Capricorn has to be prepared for everything, be it a business venture or an emotional commitment. He never waits for the opportunity to knock twice on the door. He is always waiting for it eagerly.

A Capricorn will come across as an extremely sweet person, who is shy, harmless, trustworthy and perhaps, a little obstinate. You confide everything in him and trust him blindly. In the end, he becomes indispensable and you start depending on him. But then, who’s complaining? It’s always comforting to have his strong shoulders to lean upon. A Capricorn loves taking responsibilities and will carry them out meticulously. With him, you will never have to worry about anything, just remember to let him handle the reins.