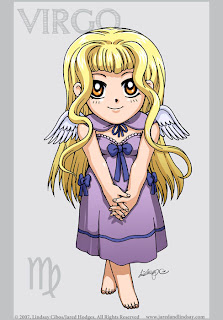 He is finicky about cleanliness, cannot tolerate lazy behavior, hates procrastination and is never blind to flaws and faults, even of his loved ones. He is also quite particular about each and every detail. However, that does not mean Virgos do not have a humorous side. It’s just that as they hate impropriety, they also cannot tolerate sloppiness. If such things do some across them, they become irritable and snappy. However, composure, patience, caring attitude and endurance define their true personality.

He may criticize you for your faults, but if you are in trouble, he will be the first person to help you fix up everything. Don’t mention a Virgo’s overly critical attitude in front of him; he will be the first one to deny it. He also seems to be totally blind to his own faults. Virgos have this habit of not being able to sit at the same place for too long and turning restless easily. If you are in love with a Virgo, remember that Virgos express their love with subtleness.

You wont see them shouting ‘I Love You’ from the rooftop. However, that doesn’t mean they are less dedicated than any other sun signs. They are just not able to express themselves fully and lack demonstrativeness. As much as a Virgo likes to help others, he finds it very difficult to accept favors. He likes to be self-dependent and hates to take obligations. He won’t spend too much money on himself, but will be extravagant in case of his loved ones or for those who are in need.

In such a case, don’t waste the money or he will be hurt. As far a Virgo’s critical nature is concerned, remember that it’s just his nature. He was just born to notice even the slightest of faults. Infact, A Virgo is the most critical about himself. At the same time, he is very punctual and will not take lateness too lightly. To him, time is of extreme importance. Virgos like small, helpless creatures as much as they like honesty, punctuality, savings, caution and vigilance. They are like the true individualists who have their own, secret way of making the heart memorize.