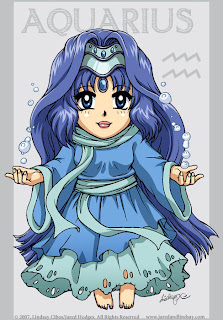 This brings a sense of isolation from the rest of the world. An Aquarian is a genius, if he does not cross the line separating it from eccentricity. His personality is the perfect symbol of an odd mix of frostiness, realism and unconventional volatility. He is a friend to anyone and everyone. Though he has his bouts of solitude, he will soon be back to his normal self again. Just remember not to disturb him when he wants to be alone. Ignore him and he will come back again, all happy and cheerful.

Aquarians dislike commitments of any kind. However, once they have made it, they will stick to it fully. They give their opinion very frankly, but never ever try to force them on anyone. In return, don’t every dictate how they should live their life. They respect individuality and expect the same from you. An Aquarian is not a crusader and will rarely be fighting for a cause. He believes in revolution, but lets other people do the work required for bringing about the same. Once an Aquarian has made up his mind, it is difficult to move him.

He is full of shocks and surprises and will hardly let you know what his motives are. He doesn’t trust people easily, not until he has scrutinized each and every aspect of their personality. However, once he trusts you and makes you his friend, nobody in this world can sway him against you. An Aquarian has an extremely good concentration power. Even though it looks as if he is not even listening to you, he will know each and every word you said. He doesn’t have a good memory, but he seems to know everything that is to be remembered.

Aquarians have an amazing sixth sense and their intuition is very strong. They can also know your innermost desires, without even having a word with you. They can convey their thoughts as easily too. An Aquarian loves changes in everything, except his own personality. He also hates dishonesty and trickery, as much as he dislikes borrowing and lending money. However, he may, at times, fool you in completely harmless and subtle ways. In case he lends you something, be sure to give it back to him on the said time and date.

An Aquarian is not the one to take a broken promise or bad debt easily. He keeps his word and pays his dues on time, so, why can’t you. Accepting conventions and authority is beyond him, but he will respect them nonetheless. He loves freedom and pinning him down is a task that most of the people cannot accomplish. An Aquarian is far ahead of you, but still it is advisable to try to catch him. Your success cannot be guaranteed, but you will surely come out a little wiser in the process.